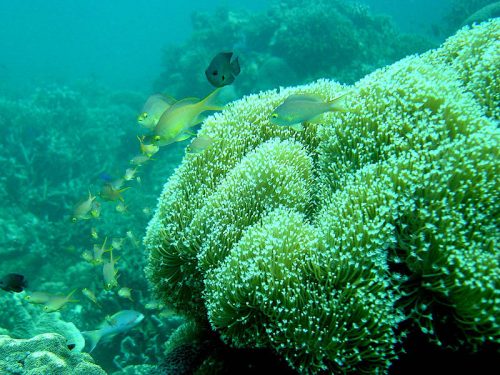 FOR IMMEDIATE RELEASE The world’s coral reefs are under threat. Some scientists say doses of cloud brightening could provide a solution to the problem. LONDON, 11 August – Here’s a new twist to the geoengineer’s dilemma: just change the climate locally – over the bit you want to protect – and leave the rest of the planet alone. Dr. Alan Gadian, from Leeds University in the UK, wants to make the marine clouds brighter and in effect raise a parasol over the ocean’s most sensitive structures, the coral reefs. Carbon dioxide dissolves in water to make a very weak carbonic acid and there’s a continuing argument about the eventual fate of the world’s coral reefs as the planet warms and the oceans become more acidic. Carbon dioxide levels in the atmosphere look set to double. Can the corals adapt to changes in the pH of sea water as yet more carbonic acid pours from the skies and drains from the rivers? And carbon dioxide is a greenhouse gas. Can the coral reefs – with a well-documented tendency to “bleach” with rises in sea surface temperatures – survive a global average warming of anything from 2° to 6°C? Since living coral reefs provide natural protection for tropical coasts, a tourist attraction, a fishery resource and above all the richest habitat in the entire oceans, their survival is vital. Cloud brightening Gadian and colleagues report in Atmospheric Research Letters that spraying fine seawater droplets on the clouds over the reefs to make them brighter could provide a level of protection for the reefs. “Our research focuses on how Marine Cloud Brightening (MCB) could quickly lower sea temperatures in targeted areas” says Gadian. Gleaming cloud tops will reflect more sunlight back into space, and lower the temperatures over the ocean below. Most geoengineering schemes are global in ambition, but to damp down warming over the whole planet would in effect be a deliberate form of manmade climate change, with unintended consequences that might create huge geopolitical problems. The marine cloud brightening strategy has this advantage: it puts local assets under local control, without extending the impact over a whole ocean, or a whole continent. Gadian has already proposed that Atlantic hurricanes could be damped down by the same technique. This time, he and his colleagues looked at simulations of warming and the brightening of marine stratocumulus clouds over the Caribbean, French Polynesia and the Great Barrier Reef, over a 20 year period.   Less bleaching Without any attempt to spray the clouds, the impact of the projected bleaching was severe. Once the saltwater sprays were factored in, the sea surface temperatures dropped, and there was less risk of bleaching, the calculations suggested. The research was entirely hypothetical, and does not address the additional global hazard that arrives with changes in sea water chemistry. The authors argue that there is no alternative to a global reduction in greenhouse gas emissions, but marine cloud brightening could at least buy time and ensure survival for corals in sensitive areas. The researchers propose that the technique could be tested on a small scale, over blocks of 100 square metres: too small to have any long term effects, and too limited to provoke much political objection. But the process would not be cheap. “We estimate that MCB would have an annual cost of $400 million, however, political, social and ethical costs make a true figure difficult to estimate,” Gadian says. “Whatever the final figure, it will be less expensive than the damage the destruction of coral could wreak on neighbouring countries, the local food chain and global biodiversity.” – Climate News Network