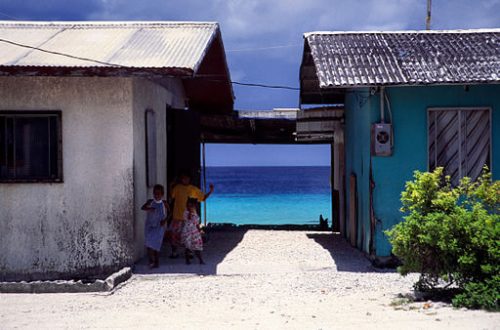 FOR IMMEDIATE RELEASE An escalating crisis caused by the simultaneous disasters of floods and drought is threatening the Marshall Islands, leading the Pacific nation’s government to appeal to world leaders for action on climate change before it is too late LONDON, 30 June –  High tides have surged over sea walls defending the capital of the Marshall Islands, adding to the crisis situation in this tiny Pacific nation, where a state of emergency was declared only last month because of a devastating drought in the scattered northern atolls. In the last week, what the islanders call “king tides” have repeatedly flooded parts of the capital, Majuro, and its airport, in one of the countries most vulnerable to sea level rise. With a population of 68,000 spread across 34 coral atolls, none of which is more than two metres above sea level, the country has been at the forefront of appeals for action on climate change. Aid from the US and other countries is now coming to the scattered communities that inhabit the palm-covered atolls, living on a few crops, seafood and a breed of small pig descended from animals that arrived on the islands centuries ago from the ships of European explorers and missionaries.

The Marshall Islands government says the drought conditions have depleted water tanks and made groundwater unsuitable for human consumption because of high salinity. In addition, the drought has damaged or destroyed local food crops, including breadfruit and banana, and about 6,000 people on 15 northern atolls are relying on fish, crabs and other coastal food resources for survival. All 34 atolls are chains of islands sitting on top of coral reefs – the remnants of long-extinct volcanoes that have sunk below the sea, leaving idyllic-looking, palm-fringed lagoons. The 1,100 islands are sometimes a few kilometres long but only 100 metres or so wide and less than two metres above sea level, leaving them vulnerable to storm surges and exceptional tides. Normally, the scant fresh water supplies are topped up from frequent evening rains, but a devastating drought, which the locals blame on climate change, has reduced a desperate population to rationing water supplies to a litre a day. Their plight has been made worse by the high tides that threaten their homes and tiny gardens.

Following a request from Marshallese President Christopher Loeak to American President Barack Obama, the US declared the drought a disaster on June 14, paving the way for the provision of disaster assistance by US government agencies.  A team from the US Federal Emergency Management Agency (FEMA) arrived in Majuro last week to assess the drought – only to witness the”king tide” and storm waves knock down the seawalls and flood the airport’s runway. Tony deBrum, Minister-in-Assistance to the President  of the Marshall Islands, is responsible for climate change issues and has called for a new surge of political commitment and international leadership to stave off further climate disasters from battering his country, and other vulnerable countries like it. “From drought to deluge, my people are suffering an escalating climate crisis,” DeBrum says. “Thousands of my people in the north are thirsty and hungry, while thousands of us here in the south are now drenched in seawater.  As I said to the US emergency team this morning, ‘Welcome to Climate Change!'”

“We are very grateful for the help we have received,  but aid will not stop floods, droughts and disease from becoming the new norm.  As we have said for years, prevention is far better than cure.  What we need is a new wave of climate leadership. “This September, we will host the 44th Pacific Islands Forum Summit, bringing together leaders from the Pacific Island countries, Australia and New Zealand, and our development partners from the world’s biggest emitters, including the US, China, the EU, India, Japan and Canada. “At the Forum, we will propose a Majuroro Declaration for Climate Leadership, to galvanise more urgent and concrete action on climate change.” He said President Obama’s announcements in the last few days about combating climate change were a welcome, if long overdue, step in the right direction – but he stressed that it was only a first step. “I urge US Secretary of State John Kerry and other climate leaders to accept our invitation to come to the Forum in Majuro.  Standing just two metres above sea level, there is no more poignant place to say: ‘Enough is enough. We will beat this thing.’” – Climate News Network