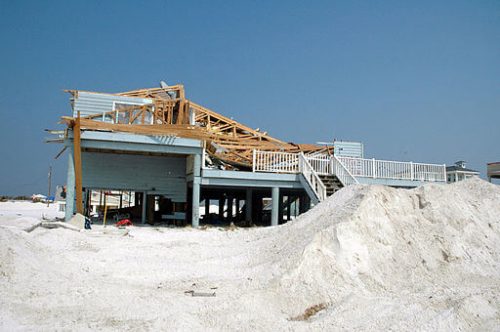 FOR IMMEDIATE RELEASE The rise in extreme weather events driven by warming of the oceans has led analysts in the global insurance industry to issue a warning that the sector risks being hit by waves of costly claims unless it starts pressurising governments to take action on greenhouse gas emissions LONDON, June 28 − The global insurance industry’s own analysts warn that it faces potentially serious financial losses unless it plays an active role in urging governments to address climate-change factors such as greenhouse gas emissions. The Geneva Association, a leading international insurance thinktank that examines trends in the global insurance industry, has published a report this week that identifies “a significant upward trend in the insured losses caused by extreme weather events”. It warns that changes in climate mean insurance companies have entered a new, highly uncertain era, and must adapt to what it calls a “new normal” in assessing risks and setting pricing policies. Traditional ways of assessing such risks, based solely on analysing historical data, are “increasingly failing”. The report, Warming of the Oceans and Implications for the (Re)insurance Industry, says the world’s oceans have been warming significantly as the result of rising greenhouse gas emissions − and it is this warming that is the key driver of global extreme events.

“Understanding the changes in ocean dynamics and the complex interactions between the ocean and the atmosphere is the key to understanding current changes in the distribution, frequency and intensity of global extreme events relevant to the insurance industry − such as tropical cyclones, flash floods or extra-tropical storms,” the report says. The warming of the oceans means an “increased loss potential” for the insurance industry, the report says. It’s uncertain how the risk associated with the warming of the oceans and changes in climate will develop over time, but the report’s authors advocate moving from traditional data-based ways of assessing such risks to what they call predictive risk estimation methods, based on various modelling techniques. Such forecasting techniques are by no means perfect and can often give rise to  more uncertainties − although this does not mean they are not useful or scientifically sound. “It rather reflects the limits of the scientific understanding and the ability to predict extreme events in a chaotic system,” the report says.

The report’s authors issue a stark warning about insurance-related problems in parts of the world that are seeing increasing levels of risk matched with growing  demands for insurance, and, at the same time, decreasing levels of self-protection. Such areas might be uninsurable, the report says. “Examples for markets with this potential are UK flood or Florida wind storm insurance.” The only way to make sure such regions remain insurable is immediately to put in place risk-mitigation measures says the report. The insurance industry should distribute high-quality information about risk associated with climate change, and should encourage adaptation through innovative product design. The report concludes: “These actions, alongside the support of science in tackling the major challenges in projecting the impacts of ocean warming and climate change more generally, will help the insurance industry avoid market failures and increase societal resilience.” – Climate News Network