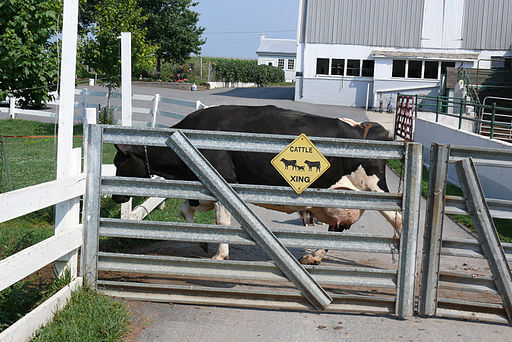 Rising temperatures may not suit livestock

EMBARGOED till 0001 GMT on Thursday 7 February US farms could be hit hard by climate change, says a study by the country’s Department of Agriculture. It says farmers could lose millions of dollars to rising temperatures, faster-growing weeds, smaller yields and new pests. LONDON, 7 February – Climate change may force American farmers to alter where they grow crops and to spend millions of dollars more tackling weeds, pests and diseases, a report says. It urges them to consider this as a risk they may have to manage. The report, by the US Agriculture Department, says American farmers have managed to adapt to environmental changes for nearly 150 years. But the accelerating pace and intensity of global warming in the next few decades might soon overwhelm it. “We’re going to end up in a situation where we have a multitude of things happening that are going to negatively impact crop production,” said Jerry Hatfield, a plant physiologist with USDA’s Agricultural Research Service and lead author of the study. “In fact, we saw this in 2012 with the drought.” The National Oceanic and Atmospheric Administration (NOAA) says 2012 was the hottest year in the US since record-keeping began in 1895, overtaking the previous record by 1°F (-17.2°C). The country suffered its worst drought in over 50 years. The report’s authors say US cropland agriculture will resist climate change fairly well during the next 25 years. Farmers will be able to minimize the impact of warming by changing their timetables and using crop varieties more resilient to drought, disease and heat. More use of irrigation and moving production to regions with a more clement temperature will also help. But by mid-century adaptation becomes more difficult and expensive as crops and livestock need to become ever more adaptable, something which will leave their productivity increasingly unpredictable. Temperature increases and more extreme swings in precipitation could cause yields of major crops to fall.

This is because higher temperatures will cause crops to mature more quickly, reducing the growing season. Faster growth could cut grain, fodder, fibre and fruit production if nutrients or water run short. Among the biggest threats is an increase in the cost of weed control, which could reach more than $11 billion annually. Warmer weather will be ideal for weeds but can also stunt the growth of traditional crops like grains and soya. The entire US is likely to warm substantially during the next 40 years, by1 to 2°C over much of the country, the study says. The rise is likely to reach 2 to 3°C in many inland regions. It says climate change will harm livestock by affecting an animal’s optimal core body temperature, which could hurt productivity. Warmer and more humid weather is likely to increase the prevalence of insects and diseases, further damaging animal health. The report, by a team of authors from the federal government, universities, the private sector and other groups, involved a review of more than 1,400 publications  which examined the effect of climate change on US agriculture. In a separate report, the USDA looks at literature reviewing the impact of climate change on the country’s forests. This showed the most visible and significant short-term effects on them will come from fire, insects, invasive species or a mix of all three. Wildfires are likely to increase throughout the USA, causing at least a doubling of the area burnt by mid-century. “That’s the conservative end,” said Dave Cleaves, a climate change adviser with the USDA’s Forest Service. “We can’t just stand back and let these natural conditions occur.” – Climate News Network